We dreamed big when we created a massive new visuals package for the Chainsmokers’ 2018 festival run. Each of the 21 unique visual concepts was a world unto itself, spanning everything from cyberpunk dystopia to glitched-out digital abstraction. Getting everything to look just right took a lot of our skills, from character design to boundary-pushing graphics techniques to lighting animations that were “played” real-time in a VR environment powered by the Unreal Engine.

Below you can follow our process from concept to render:

On a kick-off meeting, The Chainsmokers shared some ideas and references that we described internally as future-ninja-urban-military-stealth-tactical-punk. The armored booth was our first approach to creating a tank-like vehicle that shoots lights, setting the tone for the new TCS look.

The concept for this look was a herd of horror scarecrows that hang from the ceiling. The result is a mix of Village of the Damned and any post-apocalyptic robot movie. The pipeline for this clip was: brainstorm -> character visual development -> concept/layout -> modeling -> Substance -> rigging -> animation -> lighting -> rendering. This is one of our favorite clips live.

Inside Out – Neon Digital Scenic

For the Chainsmokers song “Inside Out”, we wanted to create a backdrop to support the band performance. All lights and effects in the visual are timed to accents in the music, and the scene changes with the progression of the song. These kind of clips follow a very fun pipeline, where every light source is rendered in a different pass in C4D/Octane, in order to give us freedom during the editing process. Once we have the multi-pass render it’s very easy to trigger different light accents with a MIDI keyboard or compose it in AE.

Inspired by the mechanical movement of pistons in a motor, we created a more futuristic tactical robo-army that used glowing cubes to power a mechanism. This was part of the military-punk world that we developed as the new Chainsmokers look. Coming up with the animations of the robo-arms was a bit challenging since we wanted to find the perfect choreography that would let the clip be hypnotic and play for long periods during the show.

This is how we imagined a soldier in our future-military-ninja-stealth-punk world. Cryptic glyphs flash in the background to set the tone of an ancient influence on the futuristic tech. As we usually do, we filmed ourselves to study the perfect movements for this character and use as a reference for the animation. Making the most of our production time, we used our existing model from Sick Boy and developed it further so we could re-use the rig we did a few months back.

In order to create dynamic backdrops for the artist’s performance, we made what we call internally “Digital Scenic” worlds that transform the stage into a different setting. Just like scenic pieces in a theatre, we add elements to the background that take the performers into a new world, lighting them meticulously to assure they will integrate seamlessly with the stage production we created

Physical scale is an important factor in any stage related work. This digital scenic, inspired by Ron Mueck’s works, takes you into a surreal hangar with huge, stacked skulls. The main challenge we faced here was emphasizing the skulls’ giant size and avoid the crowd from reading them as normal-sized ones (this is the difference between the clip being dope to creepy af). Usually we solve this issue by adding everyday objects that give the audience visual cues to understand the intended scale. In this case we added “kitchen” lights to the roof of the hangar, which usually have a pretty standard size.

While thinking about attributes for the show and the feelings we wanted to evoke in the crowd, we came to the conclusion that certain animals transport this energy through their movements. So adding to the wolf visual we created for the visual pack last year, we introduced a vicious scorpion and an attacking bat to the show. Ay!

For “Somebody” we developed three concepts and asked Matt McGuire to pick the one he thought fit the live version of the song best. The song talks about the struggle and importance of staying true to yourself while the people around you are focused on material desires. We thought about creating a dolly shot through four rooms, gradually degrading, like the inside of a mind that is struggling through this process. Our main reference for the camera motion was Gesaffelstein Pursuit and the intro of the movie “Neon Demon” in terms of lighting and composition.

Light Forest – All We Know

For this visual we used a unique workflow. First we created a forest in the Unreal Engine. We made some trees into emissive elements, and added neon tubes into the scenery. We added controls so that we were able to trigger the lights in our digital forest with a MIDI controller. The camera movement we programmed to the song, but all lighting animations were played live and rendered in real-time in Unreal Engine. You could use our file to experience the song and lighting animation with a VR headset while virtually walking through the forest.

This is our future-ninja-urban-military-stealth-tactical-punk army. Debugging all movements and flag choreographies took a bit of time, as we wanted to make sure to find the right mix between militaristic unity, martial aggression and dance. Strawhatz was one of our main movement references.

We created a surreal world out of six different photo resources. Single elements of the composition are animated glitches that evolve throughout the song and change on the beat of the music. 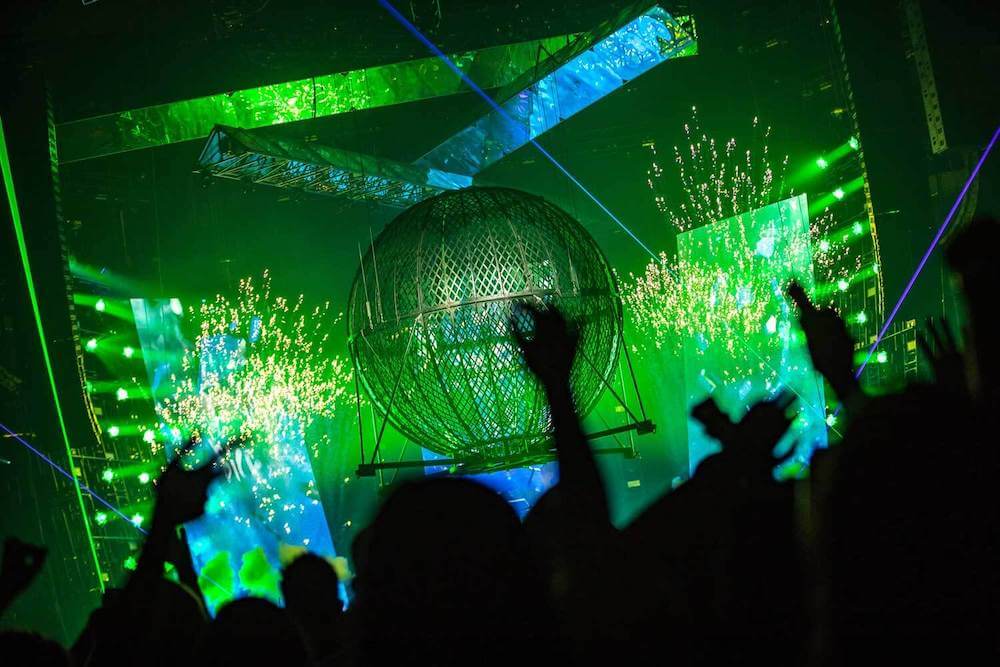 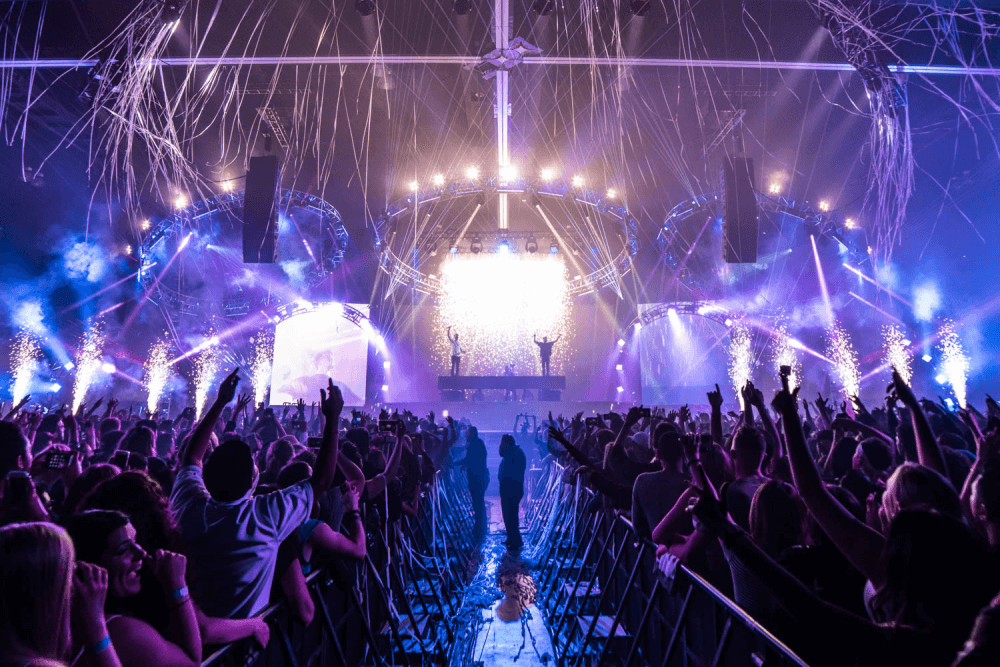